Helsinki International Boat Show gathered great amount of people interested in boats and boating to Helsinki fair center on February, 2018. There were two wooden boats made of VENDIA marine plank on display - one pulling boat from Miilu-Boats and one traditional wooden boat from Saimaan Puuvene. 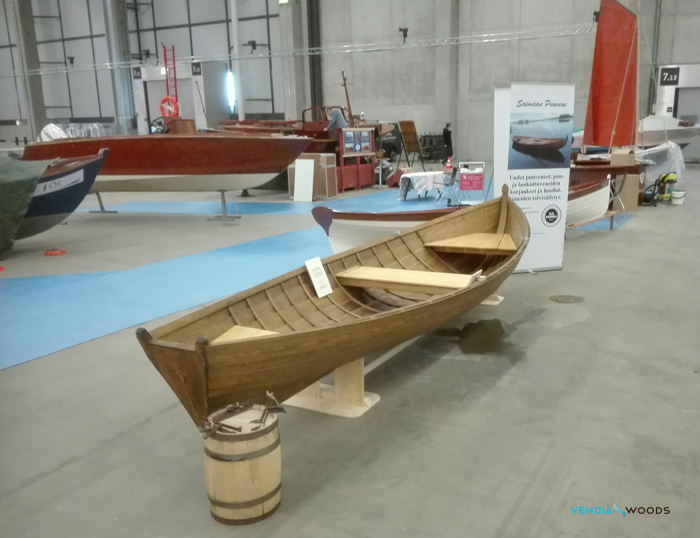 Sulkava Rowing Race, also known as one of the world’s biggest rowing events, is approaching in July. It all started in 1968 on the 14th of July as 21 boats competed of rowing around Partalansaari for the first time. All boats reached the 12 hour time limit and the fastest rowers were Antero Tiainen and Esko Miettinen with a time of 7.32,05. The event kept growing over the following years and two years later it was called “The grand Sulkava rowing race”. Over the history of 49 years the largest amount of participants during one year has reached the astonishing limit of 10 000 people.
events
racing boat
Sulkava rowing race

Kallavesj’ 2016 fair was held on the first weekend of April in Kuopio, Finland and it was an opportunity to see our mahogany faced VENDIA marine plank. Niko-pulling boat was also present. It looked great since it had received the final varnish layers and the beautiful appeareance of mahogany really stood out.
boatbuilding course
events
Kallavesj' 2016
mahogany
pulling boat

Kallavesj' 2016 fair starts tomorrow in Kuopio! Doors are opened on Friday at 11 o'clock. Niko pulling boat which was presented in Helsinki on VeneBåt 2016 fair has now got the final touch and can be found from VENDIA's section E10.
Kallavesj' 2016 has a free entrance during the whole weekend. Welcome!
events
Kallavesj' 2016
mahogany
pulling boat

VENDIA will be at Kallavesj’ 2016 exhibition from 1st to 3rd April. On VENDIA's presentation stand you will get to know to VENDIA marine plank and other products from VENDIA product family. Our new product, VENDIA with mahogany face veneer will be also presented. You will find us from the section E10.
New! Previously introduced pulling boat Niko, made of mahogany VENDIA marine plank is presented in our section. Another boat that can be found from section will be Savonian-type rowing boat made of normal VENDIA marine plank by Boatyard Ruotsalainen.
events
Kallavesj' 2016
mahogany
pulling boat
wooden boat

Boatfair Vene 16 Båt assembled 77 000 people interested in boating and water activities in Helsinki 12.-21.2.2016. Wooden boat section had a nice buzz around the wooden boats among the people who enjoying the outlook of beautiful boats and the lovely smell of wood.
events
Helsinki International Boat Show 2016
mahogany
pulling boat
wooden boat

VENDIA will be at Helsinki International Boat Show from 12th to 21st February. On VENDIA's presentation stand you will get to know to VENDIA marine plank and other products from VENDIA product family. Our new product, VENDIA with mahogany face veneer will be also presented. You will find us from the section 7a21.
events
Helsinki International Boat Show 2016
mahogany
marine plank
pulling boat

Joensuu Agricultural exhibition offered its' guests lot to see. Sunny days attracted lots of people to the  fair area and total 73 000 people visited at Joensuu Agricultural exhibition. We were also there presenting VENDIA marine plank and other VENDIA products. We had also our new product on view at the fair: VENDIA with a mahogany face veneer. In addition there were one wooden boat made of VENDIA marine plank. The boat was made by Boatyard Ruotsalainen from Nurmes.
events
mahogany
marine plank
vendia
wooden boat
Subscribe to events